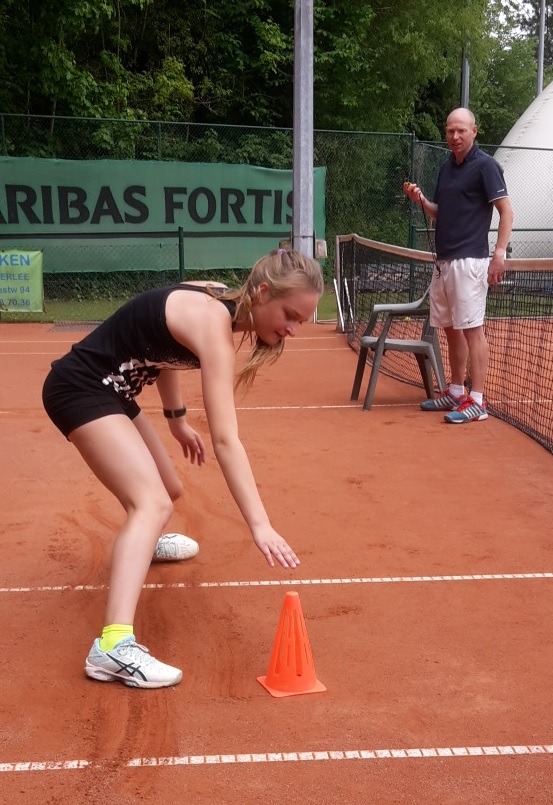 Introduction.
A tennis player does not need the same 'general' endurance as a marathon runner. On the tennis court a more specific kind of endurance is necessary to be successful, also referred to as 'repeated sprint abilty' (RSA) or 'specific endurance'.
We developed a test to measure tennis-specific endurance. With this pilot study, we wanted to test the validity of this test.

Methods.
- subjects: boys, middle school age, 6 hours of tennis training per week during school hours.
- tests:
1) a modified T test (starting signal = falling tennis ball, no obligatory side shuffle) had to be performed 8 times, with only 20" seconds of rest between each T test (mimicking the allowed rest between games during a tennis match); heart rate was measured by means of a classical heart rate monitor, immediately after the 8 sprints, as well as exactly 1' later; time was recorded using a hand-hold stopwatch. 2) the yoyo intermittent recovery test (a kind of beep test, with walking rest intervals of 10").
3) both tests were separated by 1 week. As expected, there is a strong relationship between the age of the boys and the speed they can realize during the yoyo test: older boys are faster than younger boys. A trend can be observed between the maximum running speed reached during the beep test and the time difference between the last and the first of 8 T tests. This means that better yoyo tests are associated with less decline of speed during the T test series. In other words this suggests a weak but positive relationship between general and tennis-specific endurance. A similar conclusion be drawn from the above figure: a higher 'yoyo speed' (rather general endurance) is associated with a faster heart rate recovery after the 8 T tests (as another possible measure of tennis-specific endurance). A rather strong and inverse relationship exists between the decline of speed during the T tests and the heart rate recovery after the T tests. In other words, players who became slower as the number of sprints increases also display an inferior recovery. The players who become faster as the number of sprints increases have a faster recovery of heart rate.

Interestingly, there is a trend for younger boys to become slower as the number of sprints increases. Older boys tend to hold their speed or even become faster as the test progresses.

Preliminary conclusions.
- 'specific' and 'general endurance' seem to be two largely distinct properties and they should be trained accordingly;
- 'heart rate recovery' and the 'decline of speed' after a repeated sprint test might be two similar measures of 'specific endurance' or RSA.

Acknowledgements.
Many thanks to K. Stade Leuven T.C. and head coach Gert Vanderlinden for the support.